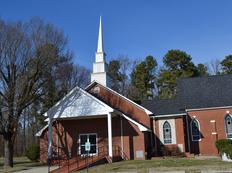 Among the earliest accounts of our worshiping is with Cedar Fork Baptist Church. In their 1859 church minutes the membership rolls contained "Colored" members listed by first name only. In 1865 "privilege was given the Colored people to make suitable preparations to hold Sabbath school on the grounds on the condition that they conduct themselves with propriety, "{to be judged by the deacons of the church}. During some of the most turbulent years in our nations's history, Shilohs's ancestors worshiped and served God as part of the Cedar Fork congregants.

After the end of the Civil War, African-Americans began to withdraw from Cedar Fork Baptist. In the October 1867 conference meeting a committee was appointed at Cedar Fork Baptist to consider a reprot upon a separation of the white and Colored members of the church. The committee on separation retired for a short time. Upon returning, they submitted the following report:

"your committee to whom was referred the consideration of the white and colored membership of this church begs leave to submit the following report.

The subject is one of grave importance and one that has for the last few years puzzled churches, associations, and conventions to know what course to pursue, but it seems now that the mystery heretofore connected with the matter is at least to some extend removed. This will appear by consulting their (Colored members') inclination, as manifested in the course they are pursuing. We see they are inclined, very much inclined, to independent action in religious matters as well as everything else, and seem to have no heart to worship God (even at churches where their memberships are) with the white race. This of itself, to our minds, very clearly indicates the course to be pursued, and that is a dissolution of our relationship as church members.

We would, there, recommend that the Colored members of this church be requested to withdraw from the church, and organize churches of their own race and color, where they can worship God without restraints and embarrassment."

It is from the recommendation of this reprot that the /colored members of Cedar Fork Baptist Church took the necessary action to organize our church.

The earliest meetings were held under a bush arbor on the property of Major Weaver, with approximately fifty members under the leadership of Rev. Ed Cole, the church became the institution of religious and social cohesion for the community. This group chose to name their church Shiloh because of their experiences with Cedar Fork Baptist Church, the outcome of the Civil War and the scriptures, Judge 21:19 and Joshua 18:19. THUS BEGAN SHILOH MISSIONARY BAPTIST CHURCH ON THE THIRD SUNDAY OF OCTOBER in 1867. Rev. Cole remained the pastor for nine years and was instrumental in establishing leadership in the church and the community.

In 1873, Rev Lewis Hackney became the pastor. It was during his administration that Shiloh Missionary Baptist Church moved to it present location on land donated by Major Weaver. The church's location, adjacent to the Southern Railway and the Hillsborough to the Raleigh Road, helped tremendously in spearheading growth in the area. The church became a symbol of prosperity, success and permanence for those living in the community.

An Education Department was added under  Rev. C.R. Mitchell and Morning Worship increased to first and third Sundays. To accommodate the additional Sunday service a Junior Choir and Tots Choir were added. Shiloh Missionary Baptist Church took a more active role in the political issues of the day. Civil Rights issues were important to church members and Shiloh Missionary Baptist Church became actively involved. One of the first things the church did was to become a lifelong member of the Shiloh Branch of the NAACP. Through the efforts of Rev Mitchell several youth from the community broke the racial barriers of the all white public schools in Cary, establishing precedence for Wake County Public Schools. A building program began under Rev. Mitchell that included renovating the existing building, adding an educational department, rest rooms, a balcony, porch and a new heating system. Dedication of this new building was held November 20, 1960, and the cornerstone was laid on July 4, 1961.

Progress at Shiloh Missionary Baptist church continued with Rev. L.E. Daye at the helm. Membership increased in 1966 worship service was held every Sunday. The Church Improvement Club and the Floral Club were organized. To compliment the additional services a Gospel Choir and Male Chorus were added. During that period the Boy Scouts and Cub Scouts were reactivated and a youth branch of the NAACP was organized.. Increased membership led to plans to renovate Shiloh Missionary Baptist Church. Once again a building program was under way. This resulted in the addition of a new building with a larger seating capacity, additional classrooms, indoor baptismal and a fellowship hall with a kitchen. During Rev. Leak's pastorate the commitment and dedication of church members to work in the church and community continued. The church secured grants to renovate the community center, ball field and play ground. New auxiliaries, the Shiloh Young Adult Choir, the Girl Scouts, and a First Aid Club were added and the ordination of Rev. Nathianiel Mayo in 1979 marked the second time in Shiloh's history that a member had been ordained.

May 1990 marked the beginning of our thirteenth pastor. Rev. Eric T. Bunch served as interim pastor for one year before becoming permanent. Under his leadership Shiloh Missionary Baptist Church began a restructuring process starting first with rewriting the constitution and by-laws. During this period the church annexed into the town of Morrisville and the Community Center and grounds were renovated and named for one of Shiloh's most dedicated members, Trustee Luther Green. 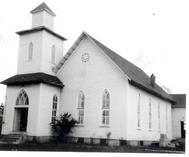 In 1882, Rev. James H. Dunston became pastor. During his ministry the original church was torn down and a new church was erected. Rev. Dunston expanded the role for the pastor and church; while serving as pastor he established an economic and educational base for the community. A public school was established and from 1882 to 1885 Rev. Dunston served on the Cedar Fork Colored School District Committee. During Rev. Dunston's pastorate many members were encouraged to purchase farms and the community organized a co-op store for area residences. We are reminded of the legacy of Rev. Dunston in the community and a Shiloh Missionary Baptist Church as he is the only person buried on the church lawn.

The earliest organization established in the church was the Missionary Circle. Originally the Home Mission, this auxillary was organized in 1927 under the leadership of Mrs. Annie Filmore with Mrs. Louise Mayo as president and Mrs. Fannie McGee as secretary. The Senior Choir has provided the longest continuous program of music. Organized over seventy-one years ago, they continue to provide music for morning worship each first Sunday. New auxiliaries were added during Rev Jones' pastorate. The sunshine band was formed to involve teenagers in church related activities. To involve young adults, the Willing Workers Club was organized, a 4-H club began and a Teen Age Club was organized. During this period the church also made plans to renovate it facilities and established a building fund.

In October 2007 one of our Associate Ministers, Rev. David Jones, became the Interim Pastor; in January 2010 he was installed as the fifteenth pastor of 'Shiloh Missionary Baptist Church. Under his direction the word of God is preached and taught in a practical manner and made relevant for application in one's everyday life. Since our last homecoming we have been equally blessed to receive new members who will continue to build upon our great legacy. Sadly, however; we lost two of our members, Ms. Debbie Hicks, a member of Voices of Victory & Praise and the Usher Board and Ms. Loretta Coates, a member of the Missionary Circle, the Senior Choirs, the Usher Board and the Hospitality Committee. We Cherish their contributions to our church and the community and we are thankful for their service.

Today, we celebrate the mission and legacy of our past. The success of an institution can be measured in several ways. An ever evolving legacy from 1867 to the present, fifteen pastors and hundreds of members attest to the success of Shiloh Missionary Baptist Church and its evangelism efforts. Shiloh is the "mother" church of Northeast Baptist Church and Mt. Zion Baptist Church, both in Durham, NC and we presently hold membership in the New Hope Missionary Baptist Association and the New Hope Convention Choir. As we celebrate our rich spiritual and cultural traditions at Shiloh Missionary Baptist Church, may be reminded that our church holds steadfast with a "MISSION OF CARING, A MISSION OF SHARING, AND A MISSION OF LOVE." At Shiloh, everybody is somebody and Christ is all.